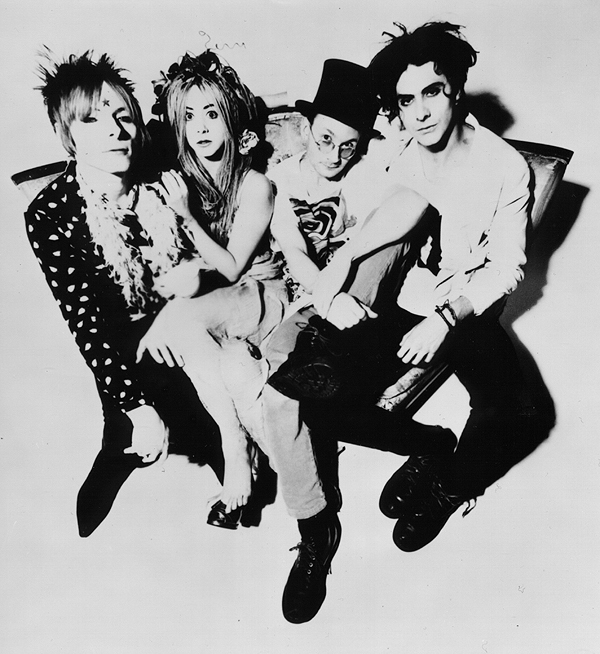 Daisy Chainsaw formed in London in 1989.  Lead singer Katie Jane Garside responded to an advertisement for a female vocalist in the (now defunct) Melody Maker.  The ad was placed by guitarist Crispin Gray and the line up was eventually completed with drummer Vince Johnson and bassist Richard Adams.

Daisy Chainsaw’s sense of performance was a brand new attitude in the 90’s scene that could not go unnoticed.  Sometimes compared to contemporary Riot-Grrrl and Grunge acts, the band actually produced a completely individual style of noise music which exploded forth on record and on stage.  As Brett Anderson’s words from a Suede song attest : “She sells heart/she sells meat/Oh dad she’s driving me mad/come see”.  Lead singer Katie Jane Garside was a notorious must-see act and the band were referred to with admiration by musicians like Richey Edwards, Jesus Jones and Dave Grohl.

Love Your Money was an unexpected national UK hit, which was quite an achievement for a grungey punkish band like Daisy Chainsaw at that time. They went on to appear on TV shows like The Word and Rapido but, in true punk fashion (unlike many others who claimed to be so but capitulated), they turned down Top Of The Pops. They followed with the single/EP Pink Flower, an indie number one, and eventually ELEVENTEEN. Never ones to jump on a bandwagon, Daisy Chainsaw stood almost entirely alone but found in producer/engineer Ken Thomas (Sigur Ros, Dave Gahan, Public Image, Cocteau Twins) a kindred spirit and together they produced this remarkable, uncompromising and individual album.

After completing a world tour the band imploded under the strain of commercial expectation but Garside and Gray eventually went on to form the acclaimed Queenadreena a few years later.